Statistics are available in many games to affect game play. In Onigiri Online, there are five primary stats, followed with eight secondary stats that are affected by the primary ones. There are also elemental affinities and weapon proficiencies which are affected differently than the secondary stats are.

Status points are used by players to increase their five main stats: Power, Vitality, Wisdom, Mind, and Dexterity. Status points are typically gained upon level up, but may be obtained from elsewhere such as a quest or through friendship levels with Amaterasu . As the player levels up, the amount of points they obtain per level tends to increase. Every tenth level the player gains bonus points in addition to their regular points.

This link contains raw data on experience and status points per level. Once the data is complete, this text will be replaced with a table containing simplified data. Please be patient.

For example, when all stats are below 20, all of them will cost 3 stat points. But by the time they reach 50, they will require as much as 6.

Also, at every 10 levels, the player will receive a small bulk of bonus points.

Some information in this table is inaccurate. We are working on updating it, but until then here is a compilation of information we have.

Power, or in otherwords strength, is the stat of choice for Axe, Katana and Odachi users. Each point adds HP in addition to Affinity to supplement the melee nature of these weapons. The HP it gives is half as much as the HP each point of Vit gives. Players who prioritize damage may choose to add Power as a secondary stat as it also gives P. Atk Spd in addition to bonus Affinity to all physical weapons every 10 points.

Vitality raises the player's maximum potential defense capability, with raised Max HP and P. Def stats. Due to the defensive nature of the stat, it is also the Spear's primary attribute, allowing the user to take a lot of punishment. Some players opt for Vit as a secondary stat due to the high amount of Max HP it gives, allowing more room for mistakes.

Wisdom helps when dealing magic damage with a Wand and increases the speed at which a magic skill is casted. It also encourages the usage of said skills by providing an abundant SP pool and high recovery rate to work with. In addition, it decreases the normally high SP costs of Wand and Staff skills, but not any other skills. As Wis provides a small amount of Critical, Critical-based characters may choose to add this as their secondary stat to boost damage output. Note that, unlike Dex, Wis only increases the rate of critical hits, but not their damage.

Mind aids the player with Staff spells, in particular, there are Mnd thresholds for certain healing spells to start healing a decent amount. Occasionally, buffs such as Invigorate or spells such as Resurrection have a chance at failure, which Mnd decreases. That being said, Mnd grants M. Def in addition to Max SP and SP Recovery, shielding the healer from ranged attacks which are primarily magic-based while giving them the SP to continually grant heals. Most players opt for at least some amount of Mnd, to cast Rapid Storm, a Staff Ougi, on themselves for additional movement speed as well as the ability to juggle Invigorate with other players for high amounts of SP. In addition, Mnd adds to the passive sp recovery rate as shown in the table below:

Dexterity is the main stat of Bows and Twin Swords. Granting Critical, Critical Attack Bonuses, as well as Cooldown Reduction and Affinity, it can be considered the best DPS stat after a player has reached maximum affinity. Characters that add this as their primary stat are usually glass cannons. Due to the damage output that Dex can provide, some choose to add this as their secondary stat.

BONUS DAMAGE STAT: Usually a percentage to give chance for a certain element to deal bonus damage or exceeding cap damage *9999999 cap* in a certain max bonus it can deal. For example, X weapon has 1.5 m break cap bonus, that means max bonus damage it can deal is 1.5 m * the element bonus increase by how many element that you have on the build. The more element you have, the more bonus damage that you can deal up to the max bonus*. This damage will ignore enemy element resistance. 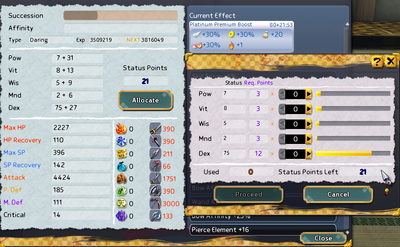 A Graph showing the correlation between main stat and affinity. Does not include Pow Bonuses for obvious reasons, and the formula shown is not 100% accurate, so be careful of errors if using it to calculate extremely exact values. The full graph will be uploaded to the wiki once more values have been obtained.

In the photos, I have a bow equipped. As you can see, the Twin Sword Affinity increased when I added DEX, but the Bow Affinity and Attack didn't increase because it's Affinity was already maxed.

Within combat, each attack or skill offers different kinds of elemental bonuses. Some monsters are weak to certain elements while other monsters may be strong to them. The elemental bonuses also apply to defense. For example, having a high fire affinity will reduce damage taken by fire type damage. The elements are as follows:

Hidden stats are statistics that are not directly visible in numbers within the game, but do play a role in the gameplay.

Passive SP recovery is the amount of SP that is recovered per "tick" or roughly every 7 seconds. It depends on the total amount of Mind rounded down to a multiple of 10 and the total Max SP divided by 50, rounded down such that the equation is as follows:
Passive SP Recovery=Passive SP due to Mnd + Rounded Down(SP Total/50)

Character type affects the starting and bonus stats that your character receives. These are Strong, Reliable, Cautious, Kind, and Daring. The stats they prioritize are as follows:

Subsequently, the stats each type provides as the player's level increases are as follows: