Enhancement is provided to the player through their partner Yoshitsune. She is able to enhance a weapon of the player's choice by sacrificing other weapons that the player selects. Every level of enhancement increases the enhanced weapon's attack by the same amount, rounded down (ie. enhancing to +10 in 3 attempts will give the same results as enhancing in one attempt). The amount of enhancement that a weapon gains from the sacrificed weapon is based off multiple factors. These factors include weapon level, weapon rarity, and how much the sacrificed weapon is enhanced. The attack gained per level depends only on the weapon's maximum level and rarity. Please note that items that are not identified (??? weapons) will not give any bonus to enhancement and that they must first be identified through Shizuka if the player wishes to use them for enhancing with any effect.

*Unsmelted. Equivalent to any 10 enhancement levels if you exclude rounding and smelting.

where x is the enhancement value specific to the weapon's maximum available level and enhancement level is the "+" of the weapon.

Every ten upgrade levels, a weapon requires being smelted in order for the next ten enhancement levels to be unlocked. Smelting is done by selecting the weapon to be unlocked, and then selecting a "Material" weapon (another weapon of the same name) to consume during the smelting process. Smelting also bestows minor stat bonuses onto the weapon, including basic combo damage, attack speed, skill force, and many others. At higher smelting levels, such as when a player attempts to unlock +60, smelting has a chance to destroy the weapon in the case that it fails. However, protective items can be applied to remove the risk completely. On the Xbox One version, items are always destroyed if the process fails, even going from 10->20! The maximum enhancement level is currently +100, but is also gated by Yoshitsune's friendship level. All current smelting levels are unlocked once Yoshitsune reaches level 20.

The costs for smelting vary depending on the weapon rarity (Gold type being the most costly).

Do note that weapon breakage is a second rate that is rolled upon failure. Therefore, 50% is never a true 50% break chance, as it only has a 50% chance to break under the condition that the weapon did not upgrade. Assuming a 10% success rate, the effective break chance would then be 45%.

When a weapon is smelted, the attack is increased by a random value between two numbers which will be referred to as the minimum boost (min boost) and maximum boost (max boost) in the table below. As with weapon enhancement, the values solely depend on the weapon's maximum available level and its rarity (ie. weapon type, level disparity, and attack are irrelevant). In the image, the minimum and maximum attack boosts are shown in yellow under the range of the new expected attack provided the smelting succeeds. 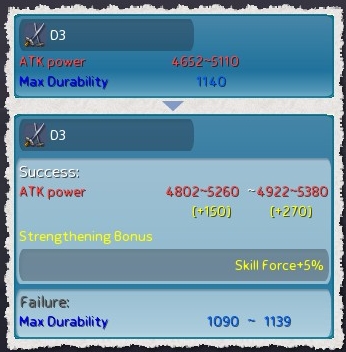